In this article we will cover schema design and row key selection in Bigtable – arguably the most critical design decision to make when employing Bigtable in a cloud data architecture.

Recall from the previous post where the Bigtable data model was introduced that tables in Bigtable are comprised of rows and columns - much like a table in any other RDBMS. Every row is uniquely identified by a rowkey – again akin to a primary key in a table in an RDBMS. But this is where the similarities end.

Unlike a table in an RDBMS, columns only ever exist when they are inserted, and NULLs are not stored. See the illustration below:

As row keys are your only indexes to retrieve or update rows in Bigtable, row key design must take the access patterns for the data to be stored and served via Bigtable into consideration, specifically the following must be considered when designing a Bigtable application:

Queries that use the row key, a row prefix, or a row range are the most efficient. Queries that do not include a row key will typically scan GB or TB of data and would not be suitable for operational use cases.

Adding salts to keys (or additional data), similar to the use of salts in cryptography as well as promoting other field keys to be part of a composite row key can help achieve a “Goldilocks” scenario for both reads and writes, see the diagram below: 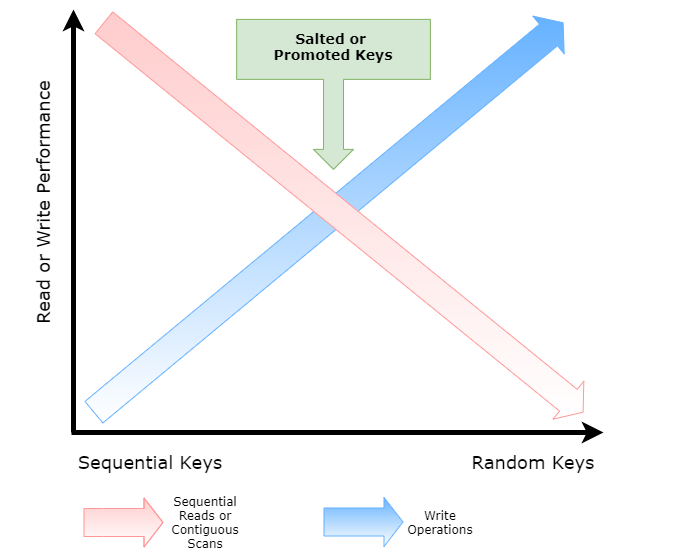 Some general tips for good schema design using Bigtable are summarised below:

Following these tips will give you the best possible performance using Bigtable.

Use the Key Visualizer to profile performance​

Google provides a neat tool to visualize your row key distribution in Cloud Bigtable. You need to have at least 30 GB of data in your table to enable this feature.

The Key Visualizer is shown here: 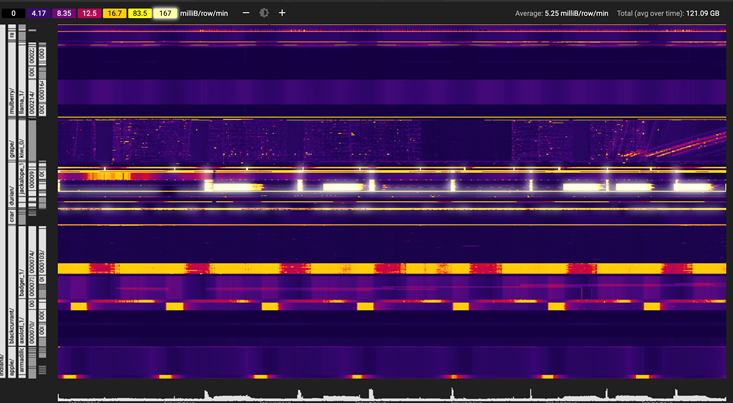 The Key Visualizer will help you find and prevent hotspots, find rows with too much data and show if your key schema is balanced.

Bigtable is one of the original and best (massively) distributed NoSQL platforms available. Schema and moreover row key design play a massive part in ensuring low latency and query performance. Go forth and conquer with Cloud Bigtable!

Bigtable is one of the foundational services in the Google Cloud Platform and to this day one of the greatest contributions to the big data ecosystem at large. It is also one of the least known services available, with all the headlines and attention going to more widely used services such as BigQuery.

In 2006 (pre Google Cloud Platform), Google released a white paper called “Bigtable: A Distributed Storage System for Structured Data”, this paper set out the reference architecture for what was to become Cloud Bigtable. This followed several other whitepapers including the GoogleFS and MapReduce whitepapers released in 2003 and 2004 which provided abstract reference architectures for the Google File System (now known as Colossus) and the MapReduce algorithm. These whitepapers inspired a generation of open source distributed processing systems including Hadoop. Google has long had a pattern of publicising a generalized overview of their approach to solving different storage and processing challenges at scale through white papers. 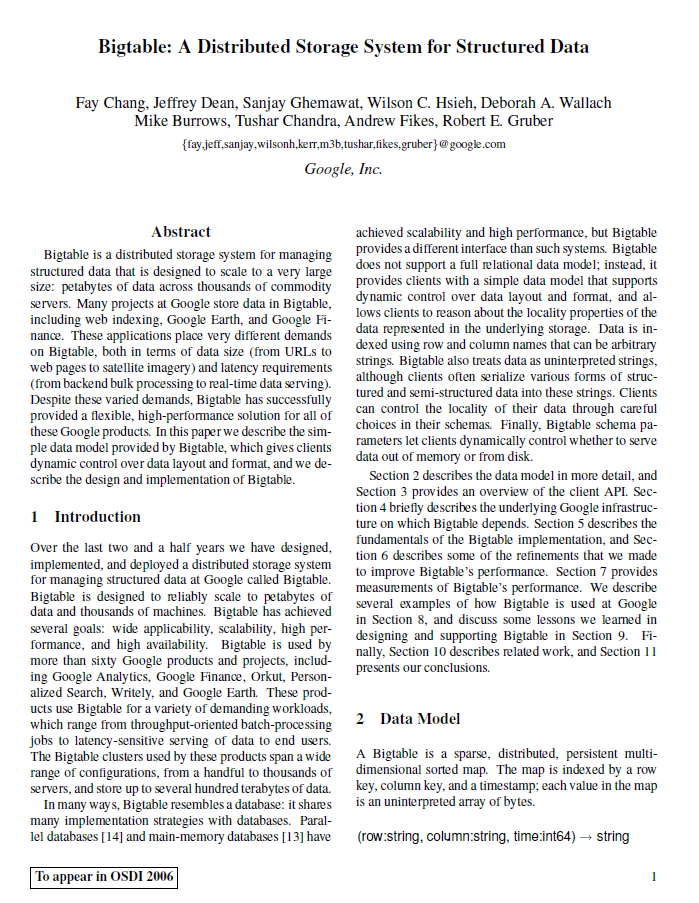 At its core Bigtable is a distributed map or an associative array indexed by a row key, with values in columns which are created only when they are referenced. Each value is an uninterpreted byte array.

Row keys are stored in lexographic order akin to a clustered index in a relational database.

A given row can have any number of columns, not all columns must have values and NULLs are not stored. There may also be gaps between keys.

All values are versioned with a timestamp (or configurable integer). Data is not updated in place, it is instead superseded with another version.

When (and when not) to use Bigtable​

Don’t use Bigtable if…​

Columns belong to Column Families and only exist when inserted, NULLs are not stored - this is where it starts to differ from a traditional RDBMS. The following image demonstrates the data model for a fictitious table in Bigtable.

In the previous example, we created two Column Families (cf1 and cf2). These are created during table definition or update operations (akin to DDL operations in the relational world). In this case, we have chosen to store primary attributes, like name, etc in cf1 and features (or derived attributes) in cf2 like indicators.

Each cell has a timestamp/version associated with it, multiple versions of a row can exist. Versions are naturally stored in descending order.

Properties such as the max age for a cell or the maximum number of versions to be stored for any given cell are set on the Column Family. Versions are compacted through a process called Garbage Collection - not to be confused with Java Garbage Collection (albeit same idea).

Bigtable is a "no-ops" service, meaning you do not need to configure machine types or details about the underlying infrastructure, save a few sizing or performance options - such as the number of nodes in a cluster or whether to use solid state hard drives (SSD) or the magnetic alternative (HDD). The following diagram shows the relationships and cardinality for Cloud Bigtable. 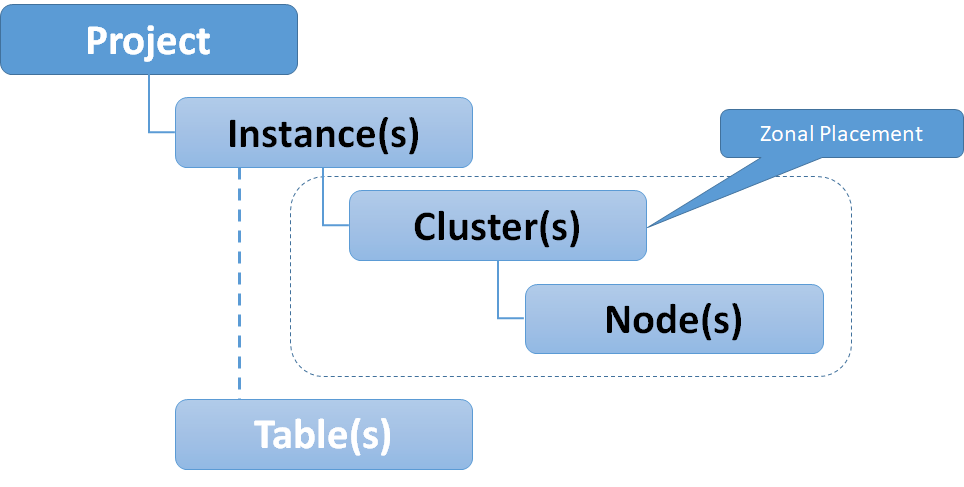 Clusters and nodes are the physical compute layer for Bigtable, these are zonal assets, zonal and regional availability can be achieved through replication which we will discuss later in this article.

Instances are a virtual abstraction for clusters, Tables belong to instances (not clusters). This is due to Bigtables underlying architecture which is based upon a separation of storage and compute as shown below. 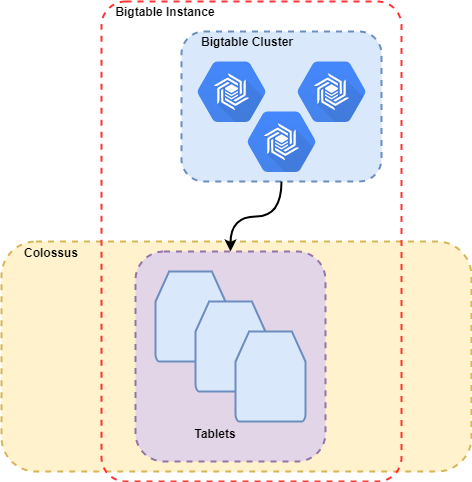 Bigtables separation of storage and compute allow it to scale horizontally, as nodes are stateless they can be increased to increase query performance. The underlying storage system in inherently scalable.

Data (Columns) for Bigtable is stored in Tablets (as shown in the previous diagram), which store "regions" of row keys for a particular Column Family. Columns consist of a column family prefix and qualifier, for instance:

A table can have one or more Column Families. Column families must be declared at schema definition time (could be a create or alter operation). A cell is an intersection of a row key and a version of a column within a column family.

Storage settings (such as the compaction/garbage collection properties mentioned before) can be specified for each Column Family - which can differ from other column families in the same table.

Replication is used to increase availability and durability for Cloud Bigtable – this can also be used to segregate read and write operations for the same table.

Data and changes to tables are replicated across multiple regions or multiple zones within the same region, this replication can be blocking (single row transactions) or non blocking (eventually consistent). However all clusters within a Bigtable instance are considered primary (writable).

Backup and Export Options for Bigtable​

Managed backups can be taken at a table level, new tables can be created from backups. The backups cannot be exported, however table level export and import operations are available via pre-baked Dataflow templates for data stored in GCS in the following formats:

Bigtable data and admin functions are available via:

As Bigtable is not a cheap service, there is a local emulator available which is great for application development. This is part of the Cloud SDK, and can be started using the following command:

In the next article in this series we will demonstrate admin and data functions as well as the local emulator.

Next Up : Part II - Row Key Selection and Schema Design in Bigtable