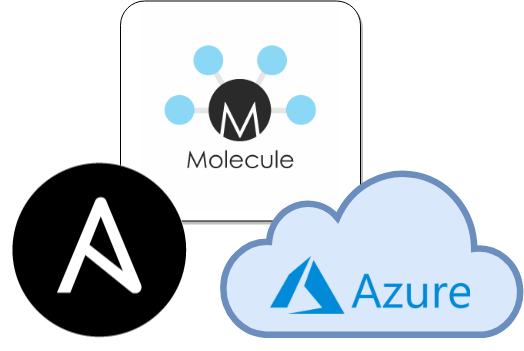 A few years back, before the rise of the hyper-scalers, I had my first infracode 'aha moment' with OpenStack. The second came with Kitchen.

I had already been using test driven development for application code and configuration automation for infrastructure but Kitchen brought the two together. Kitchen made it possible to write tests, spin up infrastructure, and then tear everything down again - the Red/Green/Refactor cycle for infrastructure. What made this even better was that it wasn't a facsimile of a target environment, it was the same - same VM's, same OS, same network.

Coming from a Chef background for configuration automation, Kitchen is a great fit to the Ruby ecosystem. Kitchen works with Ansible and Azure, but a Ruby environment and at least a smattering of Ruby coding skills are required.

Molecule provides a similar red-green development cycle to Kitchen, but without the need to step outside of the familiar Python environment.

Out of the box, Molecule supports development of Ansible roles using either a Docker or Virtual Box infrastructure provider. Molecule also leverages the Ansible drivers for private and public cloud platforms.

Molecule can be configured to test an individual role or collections of roles in Ansible playbooks.

This tutorial demonstrates how to use Molecule with Azure to develop and test an individual Ansible role following the red/green/refactor infracode workflow, which can be generalised as:

The steps required for this tutorial are as follows:

Ensure there is an existing Azure Resource Group that will be used for infracode development and testing. Within the resource group, ensure there is a single virtual network (vnet) with a single subnet. Ansible will use these for the default network setup.

There are a number of options for setting up a Python environment for Ansible and Molecule, including Python virtualenv or a Docker container environment.

Create a Docker image for Ansible+Molecule+Azure​

This tutorial uses a Docker container environment. A Dockerfile for the image can be found in ./molecule-azure-image/Dockerfile. The image sets up a sane Python3 environment with Ansible, Ansible[azure], and Molecule pip modules installed.

Setup a working environment using the Docker image with Ansible, Molecule, and the azure-cli installed.

This example assumes the following:

Ansible supports a number of different methods for authenticating with Azure. This example uses the azure-cli to login interactively.

Molecule provides an init function with defaults for various providers. The molecule-azure-role-template creates an empty role with scaffolding for Azure.

Check that the environment is working by running the following code:

The output should look be similar to…

Spin up an Azure VM​

Spin up a fresh VM to be used for infra-code development.

Molecule provides a handy option for logging into the new VM:

There is now a fresh Ubuntu 18.04 virtual machine ready for infra-code development. For this example, a basic Nginx server will be installed and verified.

Testinfra provides a pytest based framework for verifying server and infrastructure configuration. Molecule then manages the execution of those testinfra tests. The Molecule template provides a starting point for crafting tests of your own. For this tutorial, installation of the nginx service is verified. Modify the tests file using vi molecule/default/tests/test_default.py

The Ansible task needed to install and enable nginx has not yet been written, so the test should fail:

Write a task to install nginx​

Apply the role to the instance created using Molecule.

The nginx package should now be installed, both enabled and started, and listening on port 80. Note that the nginx instance will not be accessible from the Internet due to the Azure network security rules. The nginx instance can be confirmed manually by logging into the instance and using curl to make a request to the nginx service.

After applying the Ansible task to the instance, the testinfra tests should now pass.

Now that the Ansible role works as defined in the test specification, the development environment can be cleaned up.

Molecule removes the Azure resources created to develop and test the configuration role. Note that deletion may take a few minutes.

Finally, once you are done, exit the container environment. If the container was started with the --rm switch, the container will also be removed, leaving you with a clean workspace and newly minted Ansible role with automated test cases.