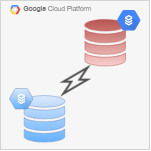 In this post we will look at read replicas as an additional method to achieve multi zone availability for Cloud SQL, which gives us - in turn - the ability to offload (potentially expensive) IO operations such as user created backups or read operations without adding load to the master instance.

In the previous post in this series we looked at Regional availability for PostgreSQL HA using Cloud SQL:

Recall that this option was simple to implement and worked relatively seamlessly and transparently with respect to zonal failover.

Now let's look at read replicas in Cloud SQL as an additional measure for availability.

Deploying read replicas is slightly more involved than simple regional (high) availability, as you will need to define each replica or replicas as a separate Cloud SQL instance which is a slave to the primary instance (the master instance).

An example using Terraform is provided here, starting by creating the master instance:

Next you would specify one or more read replicas (typically in a zone other than the zone the master is in):

Note that several of the options supplied are omitted when creating a read replica database instance, such as the backup and maintenance options - as these operations cannot be performed on a read replica as we will see later.

Voila! You have just set up a master instance (the primary instance your application and/or users will connect to) along with a read replica in a different zone which will be asynchronously updated as changes occur on the master instance.

Now that we have created a read replica, lets see it in action. After connecting to the read replica (like you would any other instance), attempt to access a table that has not been created on the master as shown here:

Now create the table and insert some data on the master instance:

Now try the select operation on the replica instance:

Some Points to Note about Cloud SQL Read Replicas​

If required a read replica can be promoted to a standalone Cloud SQL instance, which is another DR option. Keep in mind however as the read replica is updated in an asynchronous manner, promotion of a read replica may result in a loss of data (hopefully not much but a loss nonetheless). Your application RPO will dictate if this is acceptable or not.

Promotion of a read replica is reasonably straightforward as demonstrated here using the console:

You can also use the following gcloud command:

Once you click on the Promote Replica button you will see the following warning:

This simply states that once you promote the replica instance your instance will become an independent instance with no further relationship with the master instance. Once accepted and the promotion process is complete, you can see that you now have two independent Cloud SQL instances (as advertised!):

Some of the options you would normally configure with a master instance would need to be configured on the promoted replica instance - such as high availability, maintenance and scheduled backups - but in the event of a zonal failure you would be back up and running with virtually no data loss!

Full source code for this article is available at: https://github.com/gamma-data/cloud-sql-postgres-availability-tutorial