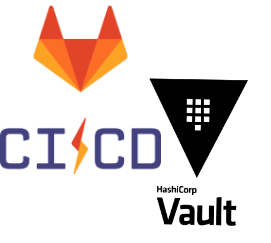 With the adoption automation for deploying and managing application environments, protecting privileged accounts and credential secrets in a consistent, secure, and scalable manner becomes critical.  Secrets can include account usernames, account passwords and API tokens.  Good credentials management and secrets automation practices reduce the risk of secrets escaping into the wild and being used either intentionally (hacked) or unintentionally (accident).

The following objectives have been considered in designing a secrets automation solution that can be integrated into an existing CICD environment. 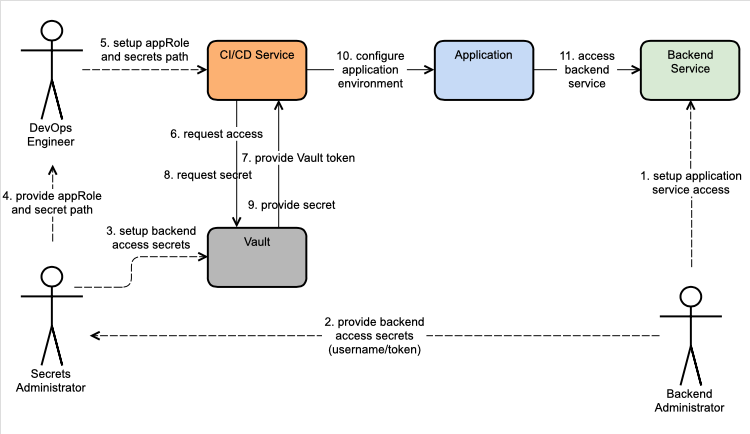 Use Vault by Hashicorp as a centralised secrets storage service.  The CICD service retrieves secrets information for integration and deployment jobs.  Vault provides a flexible set of features to support numerous different workflows and available as either Vault Open Source or Vault Enterprise.  The secrets management pattern described uses the Vault Open Source version.  The workflow described here can be explored using Vault in the unsecured development mode, however, a properly configured and managed Vault service is required for production use.

Vault supports a number of secrets backends and access workflow models.  This solution makes use of the Vault AppRole method, which is designed to support machine-to-machine automated workflows.  With the AppRole workflow model human access to secrets is minimised through the use of access controls and temporary credentials with short TTL's.  Within Vault, secrets are organised using an entity centric "rest-ish" style approach ensuring a given secret for a given service is stored in a single predictable location.

The use of Vault satisfies several of the design objectives:

Use environment variables to pass secrets from the CICD service to the application environment.

There are existing utilities available for populating a child process environment with Vault sourced secrets, such as vaultenv or envconsul.  This approach works well for running an application service.  However, with CICD, often there are often sets of tasks that require access to secrets information as opposed to a single command.  Using the child environment approach would require wrapping each command in a CICD job step with the env utility.  This works against the objective of introducing a secrets automation solution into existing CICD jobs without requiring substantial refactoring.  Similarly, some CICD solutions such as Jenkins provide Vault integration plugins which pre-populate the environment with secrets content.  This meets the objective of minimal CICD job refactoring, but closely couples the solution to a particular CICD service stack, reducing portability.

An example workflow for a CICD job designed to use environment variables for configuring an application.

The following are available in the CICD environment.

Add a Vault policy for the CICD job (or set of CICD jobs) that includes 'read' access to the secret.

Add a Vault appRole linked to the new policy.  This example specifies a new appRole with an secret-id TTL of 60 days and non-renewable access tokens with a TTL of 5 minutes.  The CICD job uses the access token to read secrets.

In the CICD job definition insert job steps to retrieve secrets values a set variables in the job execution environment. These are the steps to add in a gitlab-ci.yml CICD job.

The helper script get-vault-secrets-by-approle could be executed and sourced in a single step, e.g. source $(get-vault-secrets-by-approle).  However, when executed in a single statement all script output is processed by the source command and script error messages don't get printed and captured in the job logs.  Splitting the read and environment var sourcing into 2 steps aids in troubleshooting.

In the CICD job configuration add environment variables for the items to be sourced from vault secrets.  The secret path follows the convention of <secret-mount-path>/<secret-path>/<secret-key>

Kick off the CICD job.  Any CICD job configuration variables prefixed with "V_" results in the addition of a corresponding environment variable in the job execution environment with content sourced from Vault.

Full source code can be found at: